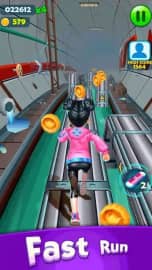 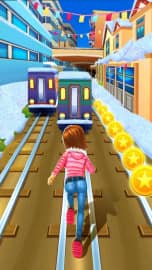 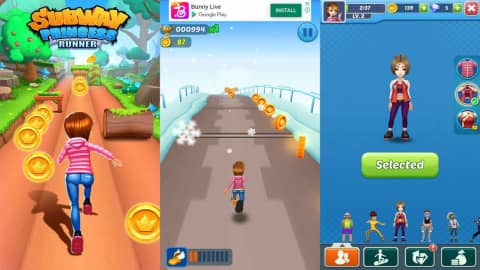 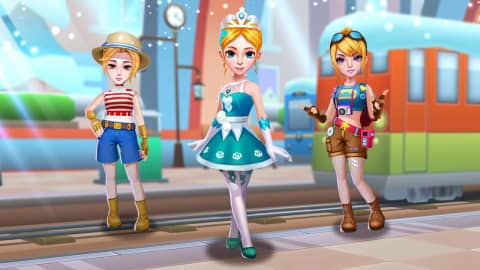 I believe we have all played parkour games, but "Subway Princess Runner" has a brand new map, new game characters and roles, and the game content will change. Join in and start a new charter together! Subway Princess Runner is an endless runner sprint game developed and run by Ivy. I'm sure the game will be even more fun!

Run on the endless tracks! The scene keeps changing, maybe a forest, maybe a city? Anyway, you have to sprint to the end as fast as you can, and you will definitely encounter many difficulties and obstacles on the way, can you avoid them all, superb? Use your skills! Dodge the oncoming buses and pedestrians in the city, cross the slopes and puddles in the forest, and head for the shiny finish line! What's your goal? Prove yourself with your score among players all over the world. The more flexible the player is in controlling the character, the easier it will be for you to complete the challenge, moving left and right and jumping will make it easier to complete the challenge; collect gold coins along the way, it is your shortcut to get high score, you can also use the collected coins to unlock more characters and change the appearance.

Don't forget to collect those gold coins along the way, the farther you run, the greater the reward, and collect props, it allows players to avoid one crisis after another. Help your beloved princess escape from the police and become the best runner, unlock levels to get more characters and challenge the world player ranking, the faster you run, the higher the score and get as many rewards as possible, it will be useful!
Game highlights.
1, the game screen HD, the color scheme is very bright.
2, the operation is simple three minutes to get started, full of fun.
3, the game operation is very smooth and gravity control.
4, the background music is dynamic, real game experience.
5, the game is full of surprises, multiple roles can be unlocked.

Use the props in the game wisely, it can easily help players to complete the challenge. The game is also a test of the player's hand speed, if the game suddenly appeared in the obstacles, the player did not react in time, then it will lead to the failure of the game. So to react in time, control the parkour direction, the jump on the jump, the move on the move.

The game also provides a number of venues for parkour, in the forest of birds and flowers, or in the busy city of traffic, and train tracks, you can protect your princess running up, dodging obstacles on the road, and shake off the police followed behind. Fully play your parkour skills, as the game progresses, the speed will be slow to fast, players have to focus more on the game challenge, and compete for high scores.

The game also allows you to collect gold rewards, similar to most endless running games, by using the gold collected in the game, you can unlock new characters and accessories. The harder the level, the richer the rewards, in the running process to focus on, because it is likely that the next obstacle will appear after you slack, hard work to run a long way but because of small mistakes and failure, it is not wort